Kitty in the shelter recovery room enjoying her handmade quilt. 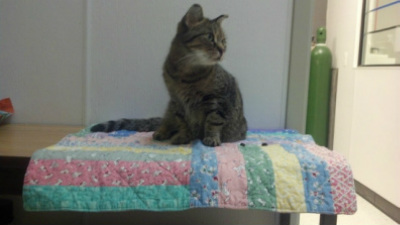 Cured from heart worm disease and adopted in September, 2012. 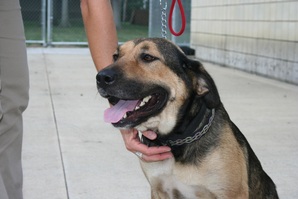 A happy boy, healthy again and adopted in September, 2012. 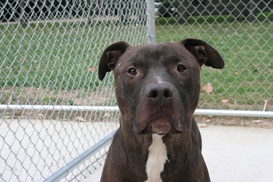 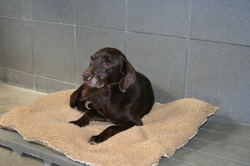 We are very happy with the relationship we have with PAWS Pet Rescue and the Jackson County Animal Shelter. Through their extraordinary and dedicated veterinarian Dr. Cathy Anderson, and her staff, many animals that have come into the shelter with medical problems have been treated, cured and adopted. Friends Of The Animals For The Jackson Area gave PAWS $5,000 in 2012 to pay for medicines to treat the shelter animals. Dr. Anderson uses the medicines to make these precious animals well again and ready for adoption from the shelter or foster care/adoption through PAWS Pet Rescue. We are delighted that "Friends" has been able to be such an important part of this process. If you would like to help, please consider sending your tax deductible donation to Friends Of The Animals For The Jackson Area, Inc. (See "Contact Us" tab above.) All monies we receive will be used to help animals in the Jackson, MI area such as the animals we have been able to support through the Jackson County Animal Shelter. (The photos above are just a sampling of some of our recent success stories!)
Update February, 2018: Through PAWS, which is partly run by the Jackson Co. Animal Shelter's veterinarian, or organization has now donated a total of over $23,000 to the Jackson County Animal Shelter for medicines as well as special surgeries that would not normally be covered by the county. Many, many animals have benefited from this gift and we are proud to know that we have helped to treat, cure, and make these furries available for adoption into loving homes.

NOTE: The photos in the middle of our slide show are from our "Pets For Veterans" program. The photo with the new human parents sitting down, petting their little dog is of our very first adoption within our program. (Sorry, names unknown.) We also have Wes and Rick Wheeler, a father and son veteran team, with their new family addition. "Duce" had been waiting patiently for his new family to find him at the animal shelter for about six weeks. He came to the shelter with heartworm disease. In the past, he and other dogs like him likely would have been euthanized as it is very costly to treat this horrible disease. Thanks to our donations and the loving care of Dr. Cathy Anderson and her staff, he was treated and cured and was able to become "Duce Wheeler" in the weeks to come. What a wonderful ending (or beginning) to Duce's journey!!  In addition to a happy photo of Duce, we also have a photo of John and Nancy Koker with their new furry son "Radar." They too participated in our Pets For Veterans program and now have a new best friend named "Radar."  We also understand that their daughter was visiting the shelter with them and she too fell in love. She wasn't part of our program but she adopted a new furry pal on her own. So that's another happy shelter success story.....
Many more successful adoptions of both dogs and cats took place during our special program. While we don't have more photographs to show, we are sure that there are many smiling faces back at home, both human and furry, enjoying their new companions!